A moiré pattern typically occurs when you scan a printed picture and then view or print out that scan. The above picture is a classic example.

This discusses how to use GIMP to remove, or mostly remove from your scan, the typical underlying cause of moiré patterns. The process we are going to use is generically called “descreening” but the exact process we will utilize is Fourier transforms.

Commercial printing presses typically only print solid colors – they don’t print shades. So they normally only print CMYK, Cyan Magenta Yellow Black (K). To get other colors it is necessary to mix colors and use shades. For example to get violet you should use cyan @ 55%, magenta @ 80%, yellow @ 55% and black @ 65%.

In the scan to the right you can see that the top of the picture is almost full magenta but the size of the magenta dots varies throughout the scan with smaller dots and more white paper in some areas giving the illusion of a lighter color.

The problem with this printing technique is that it produces a very grid-like pattern, not a perfect grid but very “grid like”. This is best illustrated in a black and white picture:

Computer scanner does a precise grid scan of an image combined with the printing process’s grid like technique , which produces moire effects. As I say a lot of printing works like this but not all – laser printers don’t and neither do true photo graphic (chemical) prints.

What can be achieved

In order to illustrate what can be achieved I scanned a print of some lemons and mandarins. I then made a second copy of the first image, but this time ran a “descreen” through it. Finally I then created a third image file twice as wide as the orginal. In this third image I put the original scan on the left and the descreened version on the right – so side-by-side comparison, no tricks.

I then opened up this third image in Internet Explorer and changed the zoom and below is what I got: 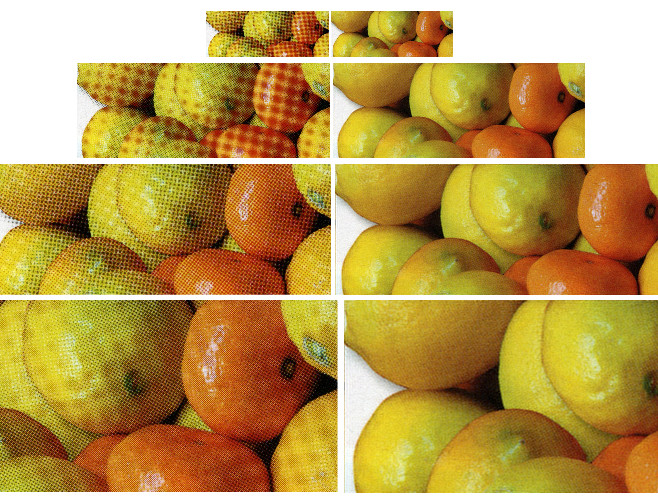 If you haven’t heard of GIMP it is a free open source image editor much like Photoshop. It takes a bit of getting used to as does Photoshop I imagine – but I like it  Its website says:

GIMP is the GNU Image Manipulation Program. It is a freely distributed piece of software for such tasks as photo retouching, image composition and image authoring. It works on many operating systems, in many languages. (more…)

Select “Descreen” from the GIMP menu:

The default settings are: