This exercise is driven by a need to connect my MythTV’s 3 HDHomeRun network tuners to my MythTV server. This is filled with various challenges:My

I have purchased a Netgear GS108Ev3 which is a “8-Port Gigabit Ethernet Smart Managed Plus Switch”, this will become the hub of my network. Previously the Sonicwall firewall was in the center.

The MythTV virtual machine, running on the VMware ESXi host, has two virtual switches attached – “LAN” and “HDHomeRunX2“. Both of these virtual switches connect to the same physical network adapter on the ESXi host. The “LAN” switch connects directly to the LAN, but the “HDHomeRunX2” switch is tagged with VLAN ID 22. The intention is the HDHomeRun tuners will be on HDHomeRunX2/VLAN22. This setup is described in the post MythTV with HDHomeRuns on VLAN

I previously configured the Sonicwall to have a couple of its interfaces as port-based VLAN interfaces. However doing this with MythTV seemed to swamp the Sonicwall and I was keen to move the load to a dedicated switch. This is why I purchased a “managed switch” which was described as supporting “port-based VLANs”.

The intention is to create the network config as shown in the diagram below. The HDHomeRuns will connected to ports that are setup as port-based VLANs using VLAN ID 22. The remaining ports will act as standard LAN ports but traffic on VLAN ID 22 on these ports should make their way to the HDHomeRun ports.

The ESXi server will bring all the traffic from MythTV including the HDHomeRun tuner traffic which would be on VLAN ID 22.

The NAS boxes would be connected directly to the Netgear to improve performance and stability. 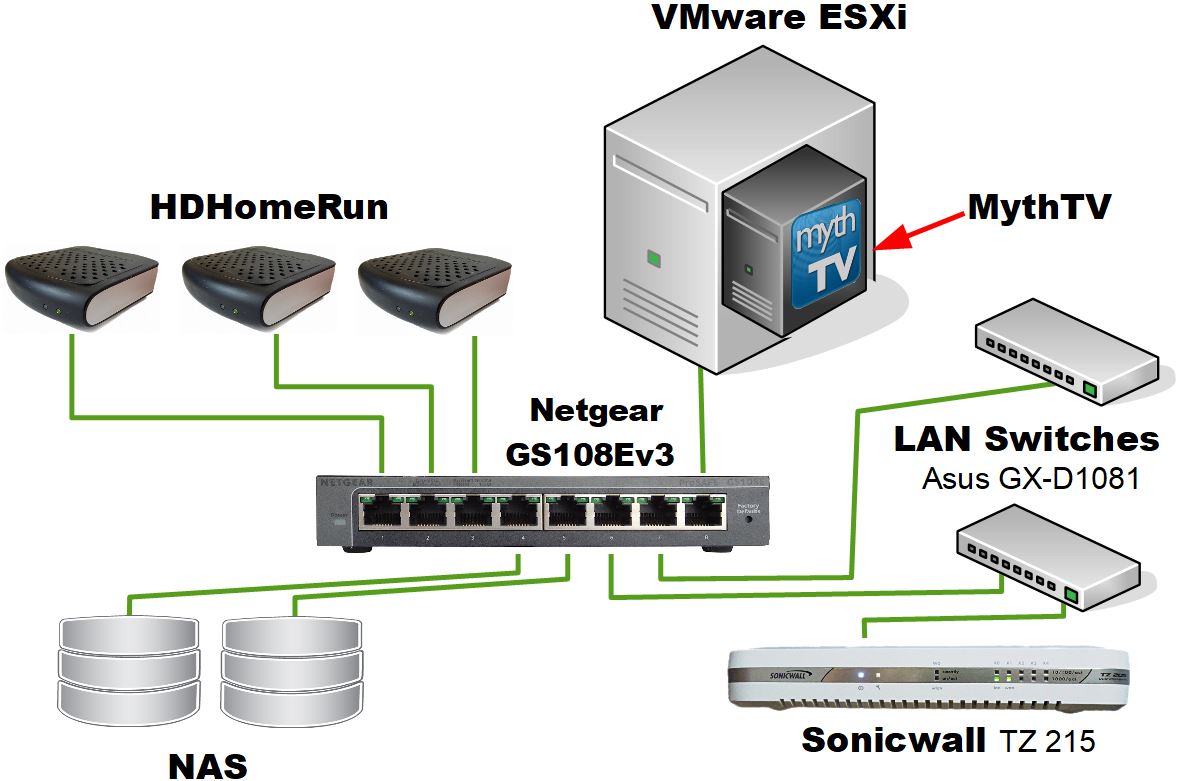 The following assumes you have just got the switch, logged in and given it a static IP but nothing else. Note the default IP for the switch is 192.168.0.239 and the default password is “password”.

Next click on “Advanced” and under that select “VLAN Configuration”

Setting “U” means it’s Untagged, “T” means it is Tagged, with respect to VLAN tagging.

From the left hand menu, under “Advanced” select “Port PVID”. This is the mechanism to set the “Primary” VLAN ID for a given port. We need to set this to 22 for ports 1,2 and 3.

After selecting “Port PVID” tick the boxes for ports 1, 2 and 3 then enter 22 in the “PVID” field, Finally click “Apply”.

When you are done go back to “VLAN Configuration” and it should look like below if you got it right: